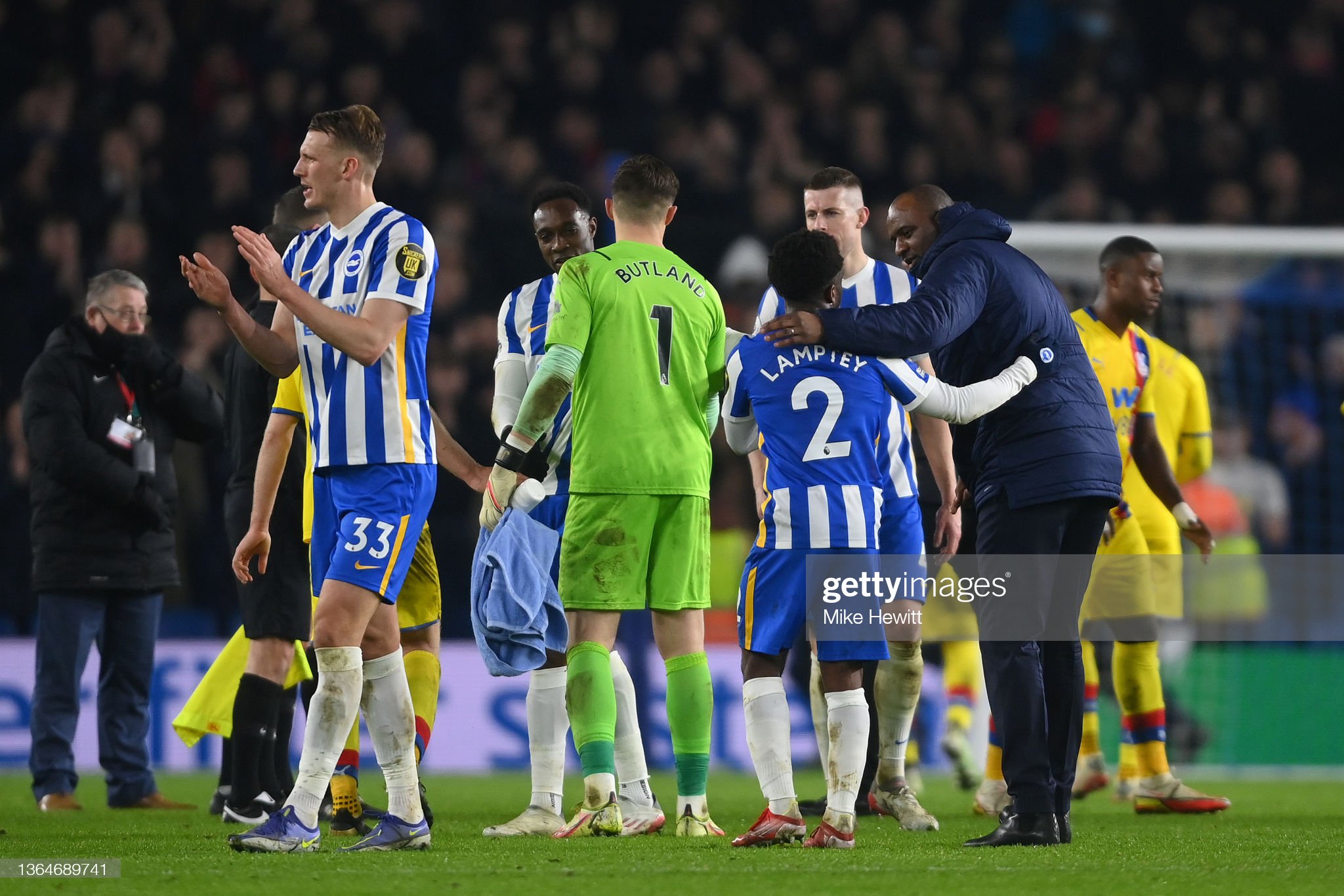 Crystal Palace’s second encounter with Brighton was set to be a fiery affair on the south coast. With just four points between the two rivals, Palace could have gone within one point had they won the match.

Both sides had key players missing, Palace with Zaha, Ayew, and Kouyate at the African Cup of Nations (AFCON) and McArthur and Tomkins out due to injury. Brighton had star midfielder, Yves Bissouma, away in Cameroon representing Mali in the AFCON tournament and their own injury troubles with Dunk and Mwepu both missing.

Palace had an all but one unchanged side that faced Millwall as Edouard replaced Mateta upfront. This meant that Eze had his first Premier League start to the season and Butland remained in goal even after his howler against the Lions.

Palace got the match underway attacking the end of the Brighton fans, but within the first couple of minutes, Brighton had already upped the pressure on Palace’s defence. Trossard had a shot blocked which would be the first sign for things to come for Palace.

Lallana was finding a lot of space breaking through the lines of Palace’s midfield. The constant onslaught in the first 10 minutes meant that the Eagles couldn’t get out of their half, especially as the passing wasn’t up to scratch.

A headed pass from Ward fell straight to Trossard who was 1v1 with Butland. He made himself big to deny the Belgian striker a goal.

Palace had an attack but Edouard couldn’t deliver a good ball in and the ball was deflected straight at Brighton’s keeper. The first half an hour was dominated by Brighton as Palace struggled to attack. Brighton had many corners in this time with Webster always the target man, he had a header saved, but it was a foul on Guehi anyway.

Yet another corner for Brighton and this time a penalty appeal as Hughes seemed to have his arm around one of Brighton’s player’s necks. The ref went to the monitor to see the replay and awarded Brighton with the penalty. Gross picked up the ball, but before he can take it a flare was thrown on the pitch from the Palace fans.

Once that was cleared, Gross stepped up and had a feeble attempt giving Butland an easy save, great for his confidence after last weekend. The ball eventually went out for another Brighton corner though.

From this, Maupay had the ball in the back of the net, but once again, the ref was over to the monitor to check the goal. Butland had both hands on the ball before Maupay knocked the ball into the goal and so the goal was rightfully disallowed.

That was in the 39th minute which set up the last five minutes to be a nervy time for Palace who wanted it to remain level at the break. Eze picked up the first yellow card of the match after losing possession which forced him to bring down Maupay in Palace’s half.

Brighton started the second half attacking their home fans and they went close when Moder saw his effort hit the crossbar. But immediately down the other end, Sanchez had to make his first real save of the game from his own defender.

Polish attacking midfield Jakub Moder had another effort on goal with Butland making a save. He could have had a goal by now with his chances in the opening minutes of the second half, plus efforts in the first.

In the 55th minute, Adam Lallana went down as if he was injured and was quickly replaced by the promising youngster Tariq Lamptey. This meant that Brighton changed from a back four to a back three with two wing-backs, Lamptey and Cucurella.

Will Hughes was the second Palace player in the book after a strong, but late tackle, what you like to see in a rivalry such as this one. Play continued, but the ref hadn’t forgotten the challenge so booked him.

Lamptey’s pace down the right side looked troublesome in his first five minutes on the pitch. Mitchell wasn’t having his best game up until then and this made it an even harder challenge for him now.

65th minute in and Vieira decides to make the first substitutions. Eze comes off for Milivojevic and Edouard for Mateta. A change was definitely needed and it was surprising to see Mateta on first in front of Benteke.

The changes helped Palace and four minutes later, who else but Conor Gallagher slotted the ball home. A great run from Ward opened play down the left for Palace with Schlupp running into the byline and eventually pulling it back to Gallagher who finds the bottom right corner. All this in front of the Palace away fans!

Gallagher had another half-chance, but there was no one following up. 72 minutes in and Brighton used their remaining two subs with Welbeck and March on for Veltman and Gross.

Even with the one-goal lead, Brighton still looked the better side with Webster having another chance on goal from a corner kick.

80th minute and it was time for Benteke to replace Olise who hadn’t shone as brightly as he did against Millwall. All game he had been forced to defend more due to Brighton’s heavy attacks.

It felt like it was only a matter of time before Brighton got an equaliser and unfortunately, they did when Maupay went to pull the ball across the box, only for it to go in Palace’s goal off of Andersen’s leg.

He’d been solid at the back all match so it was a shame to see this unlucky goal go in.

This spurred Brighton to go for the win and the two subs, March and Welbeck, linked up a couple of times and went close but couldn’t convert any of their chances.

There was still time though for Lamptey to go down in the area and appeal for a penalty, only for it to be given as handball against him. The ref was right to award the foul to Palace as it clearly wasn’t a penalty.

In all honesty, Brighton deserved the win overall, but Palace defended well during the match to keep them from scoring. Palace didn’t press high in the match, which was Vieira’s game plan as he knows that Brighton likes to keep possession and is good at this at the back. Palace would have become open to counterattacks if they pressed higher. Overall, the result for Palace was good as it quite easily could have been another away loss.