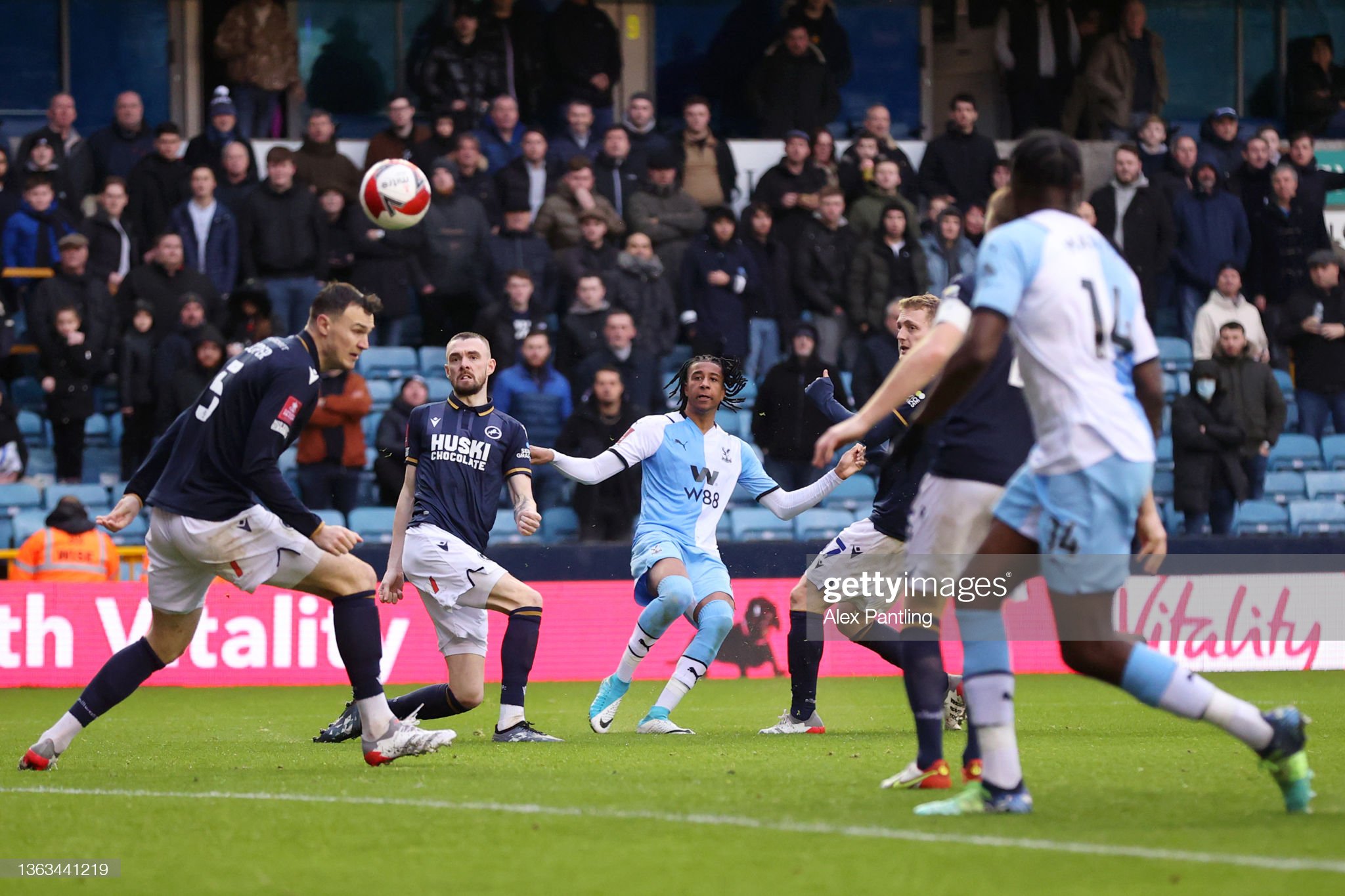 The south London derby between Millwall and Crystal Palace was always going to be a feisty, energetic, and tight match. With three of Palace’s regular players away for the Africa Cup of Nations (AFCON), it meant that Olise had his chance to start on his favoured right-wing instead of Ayew.

Eze also made his first start of the season after being out with his Achilles injury and had only made two appearances from the bench all season. This was the first time that the two teams met in a competitive fixture since April 2013, almost ten years ago.

Palace kicked off towards the Millwall fans at The Den and it was the Lions that came out on the front foot hitting the top of the crossbar within minutes. As expected in a derby like this, tackles were flying in early making it a scrappy start for both teams.

Hughes was lucky to get off without a booking for his challenge on Ojo as Anthony Taylor didn’t even award a free-kick. Afobe hit a first-time shot six yards wide of the goal and could have easily opened the scoring.

Gallagher and Saville both went up for a header and Gallagher got an accidental elbow to the eye. He was good to continue after a quick check from the physio.

17 minutes into the match and the scoring was opened by Millwall after a huge error from Palace’s keeper, Butland. Millwall’s high press resulted in him panicking and losing the ball to Tom Bradshaw before Afobe slotted it home. Viera wants Palace to play out from the back and this is what can happen when the keeper hasn’t adapted to this style.

Benik Afobe wasn’t about to pass up that opportunity 🎁

For the first 20 minutes, Millwall was dominant and hadn’t allowed Palace into the game. Schlupp was able to get a couple of shots at goal, but nothing to test the keeper. Schlupp managed to pick up a yellow card for arguing with the ref, a cheap one to pick up so early.

The match became scrappy again with tackles flying in and Palace complaining at the refereeing. Taylor even went to have a word with Viera on the touchline to tell him to reign it in.

Palace started to get a hold of the game pushing Millwall back and Gallagher had a curler go wide by a few inches. Guehi brought down Ojo who was tricky down the right side all afternoon and he was lucky to not be booked. The free-kick presented Bradshaw with a chance that he fluffed, but it was ruled offside by the linesman, even though it wasn’t on the replay.

The game continued to be heated with Saville going into the back of Andersen who gives him a gentle slap on the face after. The ref let both go and carried on with the game.

One of Palace’s final chances of the first half fell to Eze, but Saville was there again, this time to get the ball and put it wide for a corner. Viera and the Palace players were screaming for a penalty, but the decision was correct as it was an amazing tackle.

Andersen was involved again, this time with an off-ball coming together with Malone after he thought he was pulled down in the area from the corner kick. Millwall had Andersen rattled and it was lucky it was the end of the first half as the game needed a break or it could have become more heated.

The Eagles came out for the second half all guns blazing and within one minute from the kick-off, Olise turned his man inside to curl home Palace’s first goal with his favoured left foot, it hit the post and went in. Millwall fans will argue that the goal would have been disallowed if the FA Cup had VAR in place as Mateta was marginally offside in the run-up to the goal.

It’s official: Michael Olise has a wand of a left foot 🪄💫

A couple of minutes later and Olise was still causing Millwall havoc down the right side. He had an identical attempt, but this time the ball hit the post and bounced out. Palace was on the front foot still and Olise could have had a hat-trick in the opening 10 minutes of the second half if he’d converted all his chances.

Millwall’s George Saville went off injured after 50 minutes for Maikel Kieftenbeld to replace him in the midfield. This seemed to help Palace’s momentum with Eze getting more of the ball to run at them. He caused Millwall’s Bermondsey boy, Billy Mitchell, to foul him and pick up their first yellow card of the afternoon.

Two minutes later, Olise whipped the ball into the box for the unmarked Mateta to head home, making it 2-1 to Crystal Palace. It appeared to be an easy goal, but hats off to Mateta who wasn’t involved much in the first half.

Mateta started today after the rumours emerged late in the week that his loan deal could be cut short for a permanent move to Saint Etienne from Mainz.

Palace looked comfortable at this stage of the match after the nervy first half and Millwall had to make a change to their formation moving to four at the back. Mason Bennett replaced Alex Pearce and made a difference to the energy of the team.

Two minutes later in the 64th minute, Mateta and Eze were replaced by Edouard and Benteke which looked like it might signal more trouble for Millwall.

However, that wasn’t what happened, Millwall kept pressing Palace and Conor Gallagher even made a couple of wayward passes to gift the ball back to them. It was his first game back after being out with an illness for the previous two matches and it could tell.

Ojo, one of Millwall’s brightest players of the match came off in the 80th minute and made way for Nana Boateng to make his senior debut for the Lions. This was along with two other Millwall substitutes who were going all out to get an equaliser. At the same time, Viera brought off Will Hughes, who didn’t look best pleased, for former captain, Milivojevic.

Millwall kept on the pressure and had a few close chances from crosses down the right side. Mitchell couldn’t get tight enough to stop the crosses. Claims of handball rose when the ball hit Guehi in the box, but it was clearly not a penalty. It just missed Boateng’s foot who would have maybe been offside though.

Jack Butland was booked for time-wasting by Anthony Taylor as he’d been taking his time on multiple occasions. A few straightforward saves came his way in the last 10 minutes and he dealt with them well. Matt Smith who had scored in the FA Cup against Premier League sides (Liverpool and Everton) before saw his header fly straight into Butland’s arms. It needed a lot more power on it to cause him trouble.

Unfortunately, the game was marred from the start by Millwall fans booing the Palace players taking the knee as well as homophobic chants directed at Gallagher.

Both sets of fans were also involved in throwing items onto the pitch such as flares and bottles. This behaviour was condemned by both managers after the game and will no doubt be looked into by the FA.