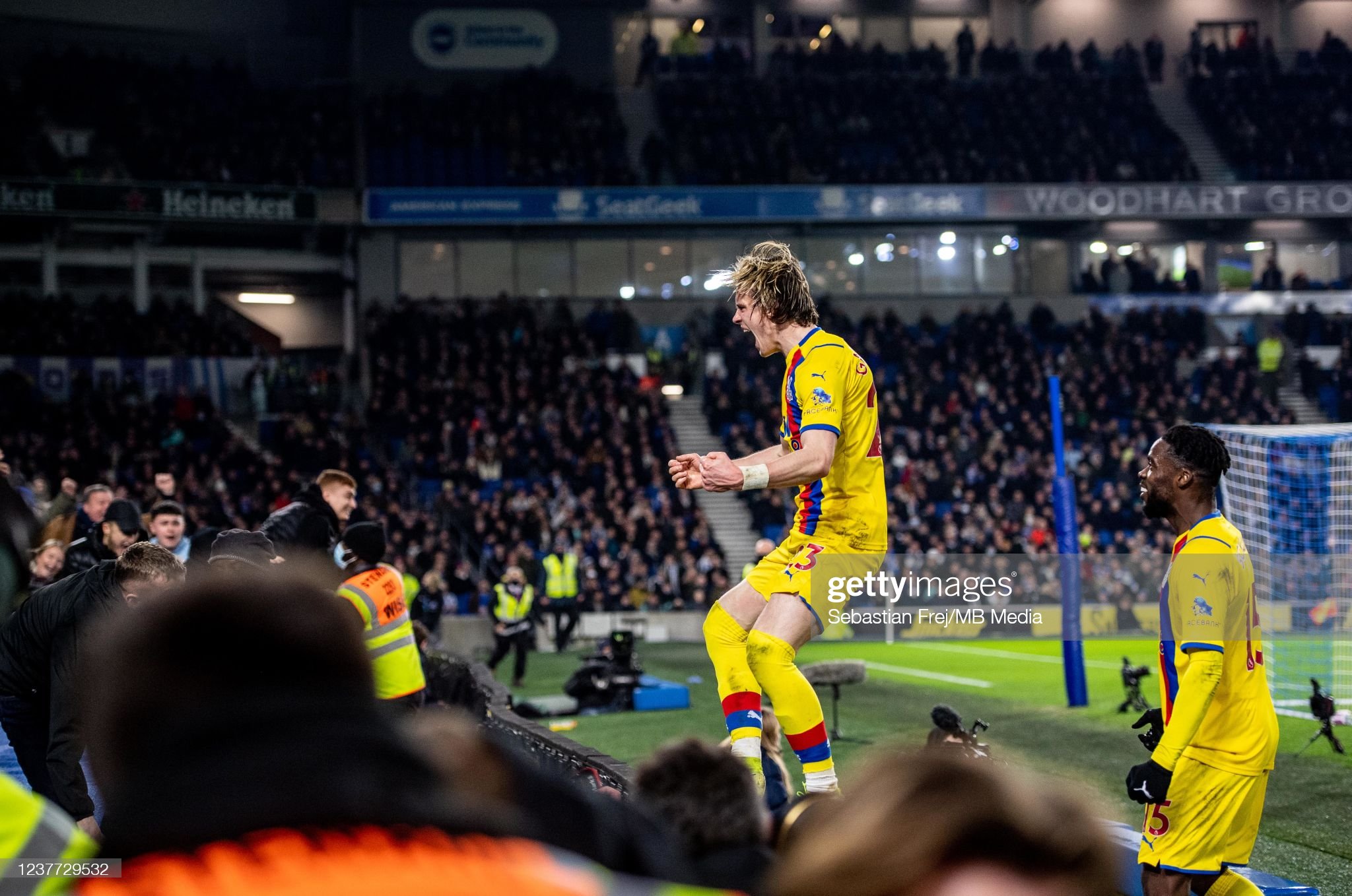 There’s so much talk about Conor Gallagher and what the future holds for this young England talent, so we’ve decided to have our say on the situation. With less than two months left of the 2021/22 season, Gallagher only has eight league matches left for the Eagles and potentially a FA Cup final if Palace beat his parent club, Chelsea, in the semi-final on the 17th of April.

Will he return to Chelsea and get game time from Tuchel as he has under Patrick Vieira at Palace? He’s not going to play every match and certainly not 90 minutes of every game when he’s competing in Chelsea’s squad. So, what could the future hold for this maverick of a player?

Could Chelsea cash in on Conor?

With Chelsea currently in financial limbo without a new owner secured, could they decide to cash in on the young midfielder? Now that he’s set the Premier League alight with Palace it wouldn’t only be the Eagles that show an interest in securing his signature. Richer clubs like Newcastle would be able to outbid Palace, but would the player want to make that move? There have been initial price tags of £40m bandied around and after the season he’s had we can see why.

Even two of the top Italian teams, Juventus and Inter Milan have been keeping an eye on his progress this season. But, it’s unlike foreign sides to spend big on a young English player when they can buy a local lesser-known player for much less.

On Transfermarkt.co.uk his value has rapidly risen since showing what he can do at Palace. Since he joined on loan in the summer his estimated transfer value has gone from £13.5m to £22.5m now at the end of March 2022. This is just an estimate and if Chelsea did want to sell him we think they could easily get £40m for him.

The fact that he’s now been called up twice for the England squad adds to his current estimated value. Then, there’s the amount of interest that Chelsea would receive from other clubs apart from Palace.

Would Palace splash out if he was for sale?

It’s clear to see that Conor is loving his time at Palace, but would the Eagles be willing to break their club transfer record to bring the 22-year old to Selhurst Park permanently? With the fairly recent backing from John Textor, we think that the club would do everything they could to get him on a permanent deal if the opportunity arose.

His wage demands are going to increase after this season and a £40m lump sum on a player is a lot for Palace. Not to tempt fate, but if the FA Cup goes well then there would be more money to put towards a Gallagher fund.

As we’re in a World Cup year, Gallagher will want to get as much game time before it so he has a strong chance of making the squad. As we said previously, we doubt he’ll get the same amount of minutes at Chelsea as he has at Palace which could make the player want to go out on loan again.

Palace would be at the front of the queue to have him for another season, but we’re sure there would be interest from other clubs too. Plus, that’s if Chelsea doesn’t find a way to incorporate him into their squad.

These will be discussion points between him and his parent club when he returns at the end of the season.

Return to his boyhood club

Gallagher spent the 2020/21 season on loan with West Brom and before that was loaned out to Swansea and Charlton. Now, after another season on loan, this time at Palace, it seems the most obvious future for him would be to return to Chelsea. He’s proved what he can do in the Premier League when given the chance and having a player of his quality on your books is a great advantage for The Blues.

Last week it was announced that shareholders of the 20 Premier League clubs voted in favour of allowing five substitutes in the 2022/23 season. Even before this, Thomas Tuchel had been outspoken on this topic stating the English league was the only top league in Europe that didn’t allow more than three substitutes.

Now that he’ll be able to rotate the team more, there’s even more chance that Gallagher will be involved in Chelsea’s first-team squad. The question that Conor will be asking though is how much game time will I get as he’ll be wanting to impress Southgate to be part of the England World Cup squad.

Do we think he’ll be at Palace next season? We’re going to be realistic and say no, unfortunately not. He’s clearly a class player and as Wayne Rooney pointed out on Monday Night Football yesterday, why would Chelsea try to buy Declan Rice when they have Conor Gallagher ready to fight for his place in the team.

We’re not going to start speculating on who Palace could get to replace him just yet. Let’s enjoy watching him in red and blue for the remainder of the season and then look at Crystal Palace’s transfer targets then.